Apparently, I’m getting old – or at least that’s what one former student told her younger brother this week. “I remember Mr. St. Romain. Has he gone to your class to read a story? He did that when I was in kindergarten, but that was a long time ago. He must be really old now!” Of course, I laughed when her mother told me this. I wasn’t surprised that her daughter remembered me. We had quite a few exchanges, given the many challenging behaviors she exhibited.

Though she had extreme behaviors, what I remember most was the negative perception she had about herself and the world around her. “Everyone’s picking on me.” “Nothing ever turns out right.” “No one likes me.” “I’m always in trouble!” Though this last thought was somewhat true, it troubled me that she could see no hope for a positive outcome – and when a student is giving up in kindergarten we have a problem.

Mom told me her daughter is doing fine now, but she also said it took a village of teachers along the way building up her daughter and believing in her abilities to do better. “For some reason she started every year expecting to let everyone down, assuming teachers would give up on her.”

Teachers, perception is reality, so if students don’t see hope or believe in themselves, we need to do so for them. Be the teacher who refuses to allow frustration to become despair, no matter how challenging the behaviors. Be the teacher whose voice continually rings in your students’ ears saying “I will not give up on you.” For you never know when your voice might be the one a child hears that makes all the difference in the world.

Have a great week with your kiddos.  You make a difference.

Parents often ask me what they should do when their child misbehaves at school. I have many thoughts...
When the sun sets this evening another spring break comes to a close for me.  It’s been a great week,...
Teach Skills &
Break Habits 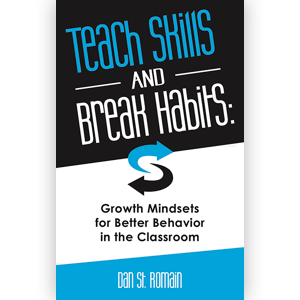